Eric Shelby has been with the Foodbank since March 2011. Eric worked for the electrical contractor that constructed the current Arkansas Foodbank building. When the staff transitioned into the new facility Eric came on board to officially join the team. In the words of our CEO Rhonda Sanders, “This is Eric, he came with the building.” In the last 6 years Eric has overseen Facility Maintenance, Food Safety, Compliance, and Transportation for AF before being promoted to the role of COO.

Eric lives in Saline County with his wife, Julie. They have 2 kids, Nathan and Hannah.

Eric received a BA in Psychology from Henderson State University and holds a Master Electrical license.

Prior to stepping into the role of COO, Eric spent the last 3 years as a saltwater fishing tournament organizer. 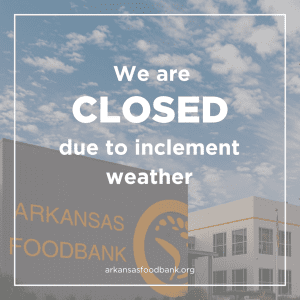 Due to Inclement Weather in the area, the Arkansas Foodbank will be closed Wednesday, February 1st.

Please call our inclement weather line at 501-569-4390 or visit our social media pages for any updates.